In Columbia, Tennessee where I was born, I remember picking armfuls of daffodils with my sister and selling them by the bundle to neighbors for 10 cents.

I remember bringing home in a round cardboard Quaker Oats container, a very tiny bluegill sunfish caught in a farm pond and releasing it in our small pond. I remember standing at the edge of the spring fed pond staring into the crystal clear water searching for my brought home pet fish. I can see that fish in my mind as clearly as if it were yesterday.

I remember the giant magnolia trees blooming with huge white fragrant flowers and the pink hollyhocks growing against the white painted brick walls of the old smoke house that had a dirt floor perfect for toy trucks. I have loved flowers ever since. And I’ve been raising fish as a hobby since I was twelve.

Being an artist is getting to be a child all over again, bringing home the things that interest you, exploring making stuff, and being immersed in both the moment and the excitement of “what if,” even though the oatmeal container is leaking. The fun was in catching the fish; the joy in bringing it home alive. The fun was in picking the bunches of flowers; the joy in neighbors buying them. 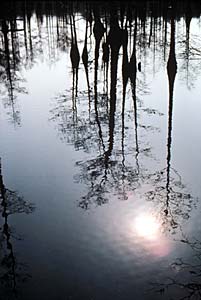 I was assigned as a cameraman to a documentary film unit when I was drafted into the army in 1969. It was here that I developed some sense of personal image making. Between short film assignments to provide informational coverage for the Pentagon I would spend weekends wandering in a nearby cypress swamp with my personal camera. At this point in my life I was primarily interested in filmmaking. When a lieutenant from the unit accompanied me on one of my excursions, I had a revelation: that you could create a single image just for the self satisfaction and pleasure of doing so. I remember asking him what he would do if he made an image he liked. He thought for awhile, and finally said that if he was really happy with a photograph he might make a large print, frame it and hang it on his wall to enjoy and share. At that time this was an entirely new concept for me. It was on that day, with that lieutenant, out in a cypress swamp in North Carolina that I made an image that expanded my understanding of my creative perceptions and personal joy.

After military service I returned to St. Louis where my family now lived and started working for a large communications company that produced films and media projects. A year later I left to start my own small production service and found that the part I loved the most was the image-making. Several years later I moved to Minneapolis and put out my shingle as a commercial photographer.

I live in the Linden Hills neighborhood of Minneapolis with Mary, my sweet wife, Hannah, the cat who runs the household, twelve fish tanks in the basement, three small fish ponds in the backyard and an ever-growing garden that may one day make lawn mowing obsolete. I’m always surprised at how the garden seems to have its own development plan, it just takes me awhile to figure it out. I’ve been spending more and more time exploring the image possibilities in my own yard.

When I was a young man I looked to the outside world for answers and meaning. I have traveled and searched and experienced. Now, I have come to the realization that nearly everything I need is here, meaning inside myself, at my home, with my family and friends. In the ordinary world around me are dramatic discoveries to explore, creations (stuff) to make, and life to be appreciated, enjoyed and shared. Everyday life with exceptional meaning.

I have been exploring making images for the past 35 years..